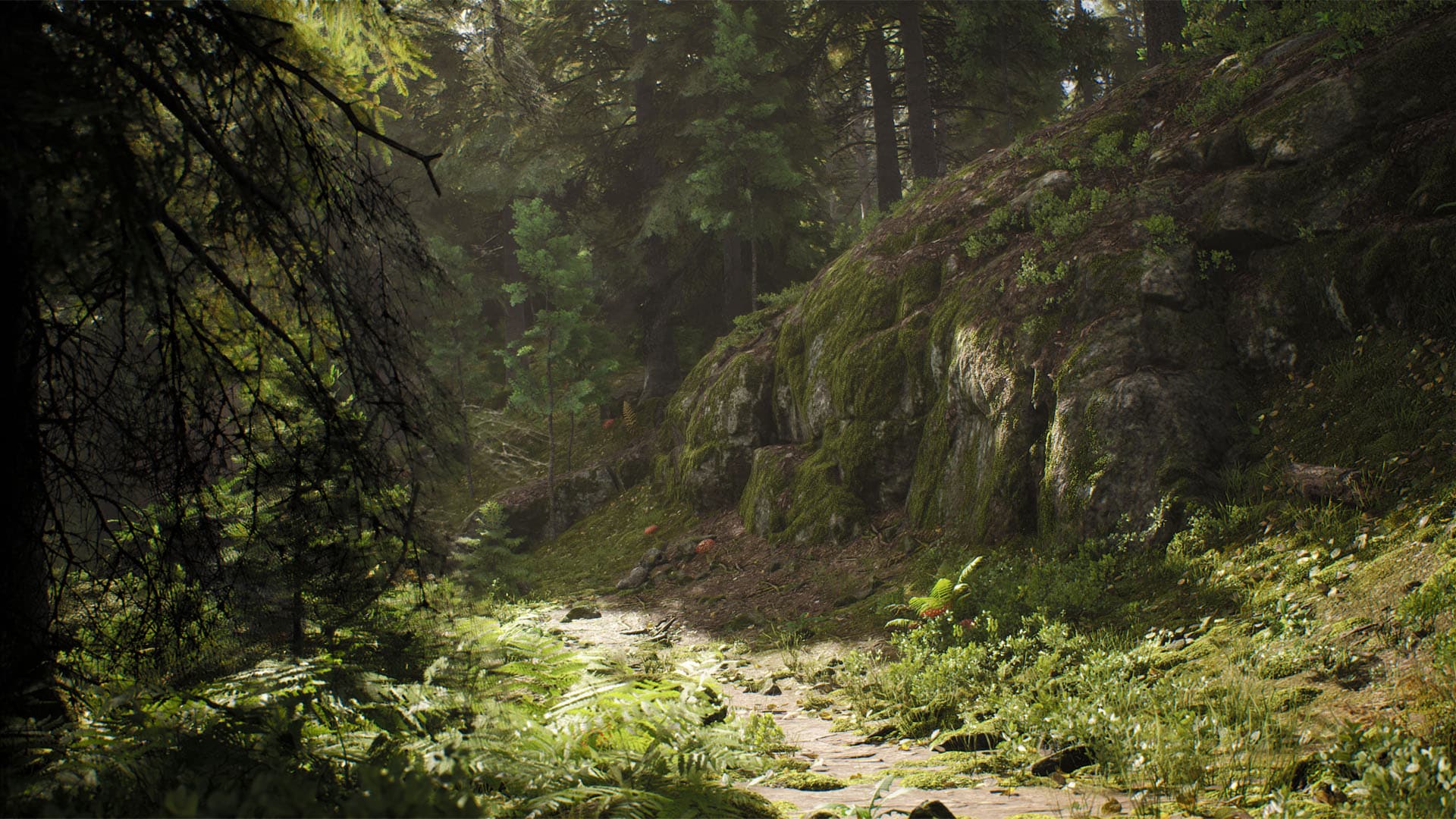 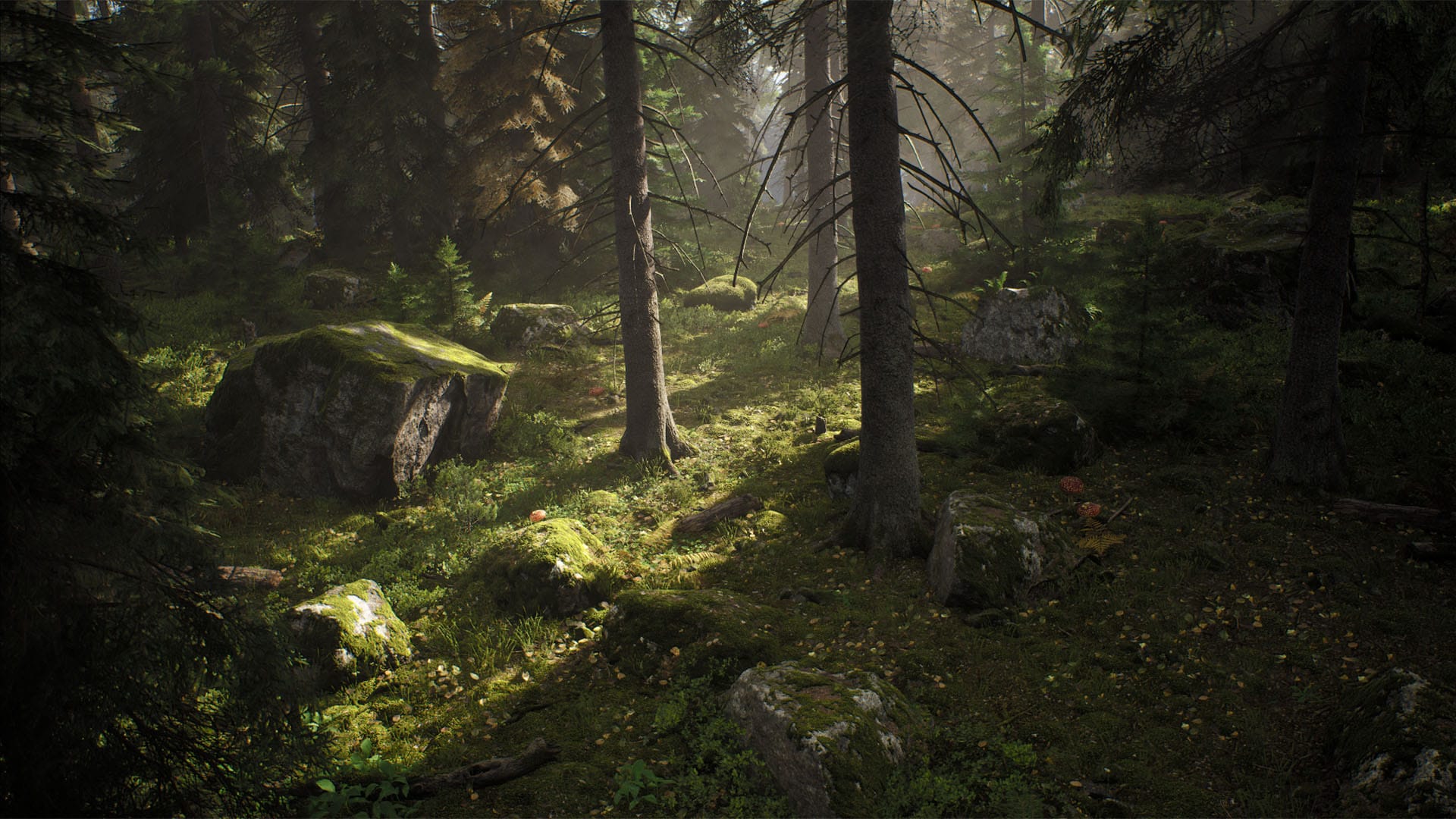 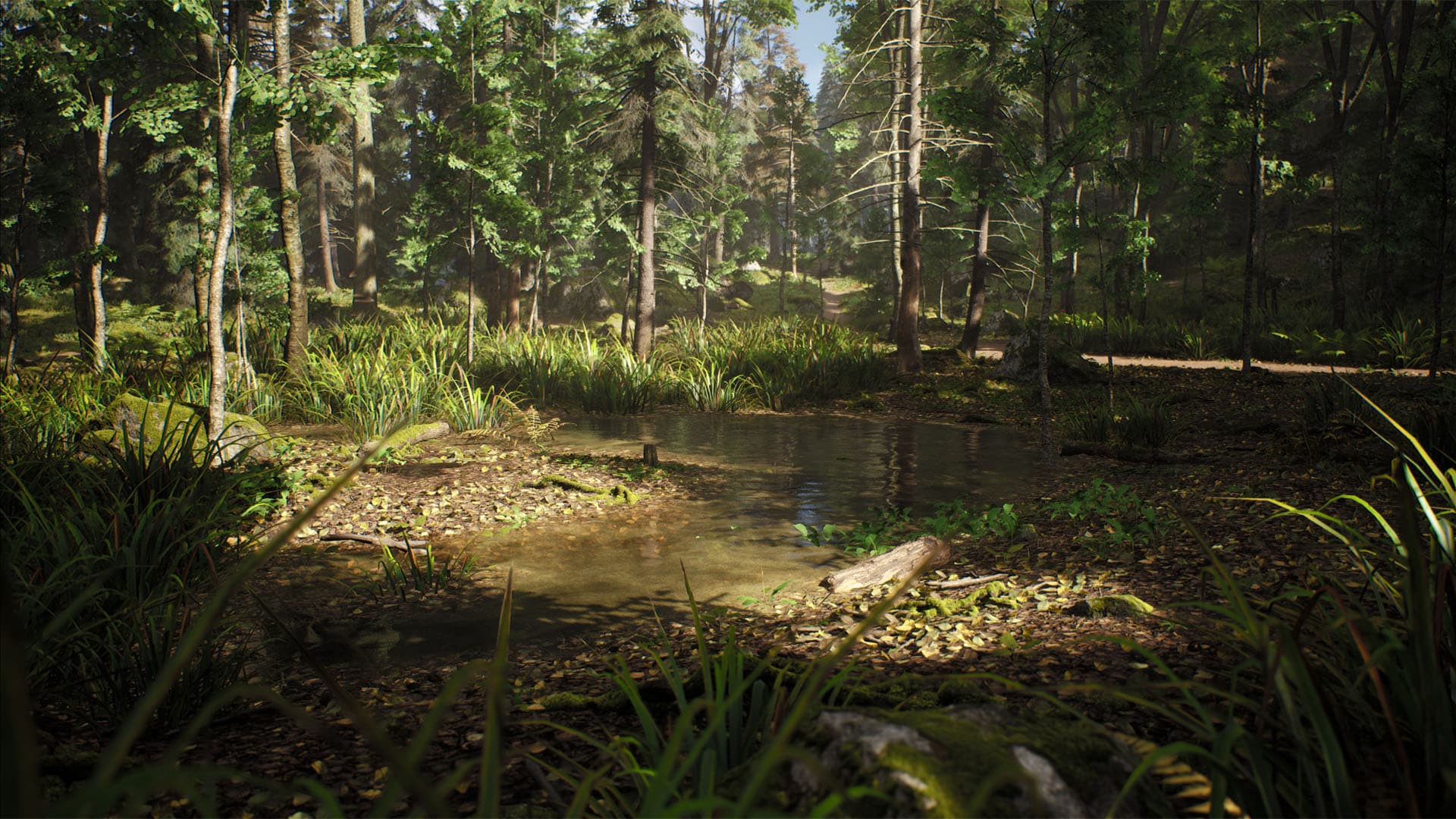 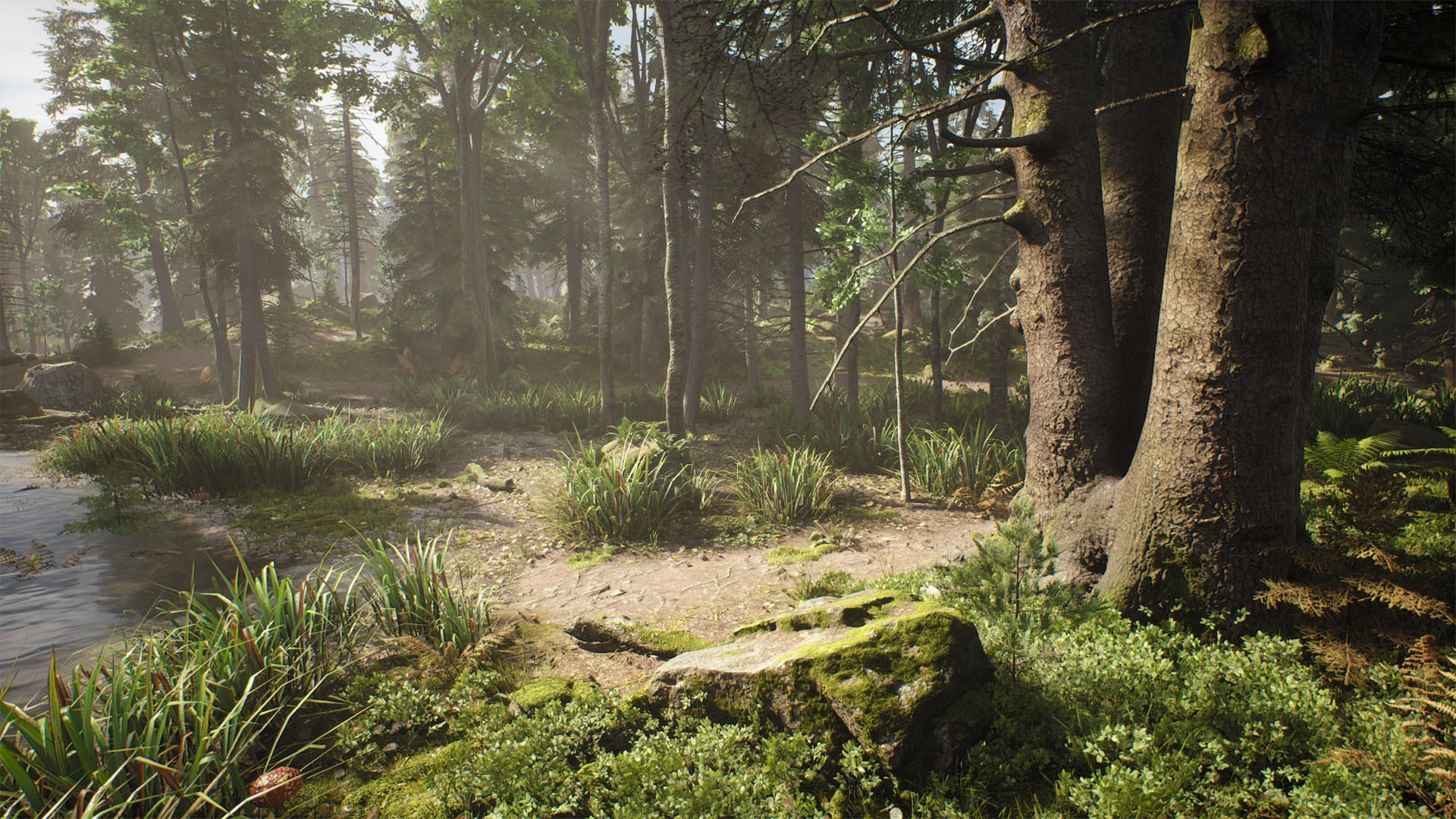 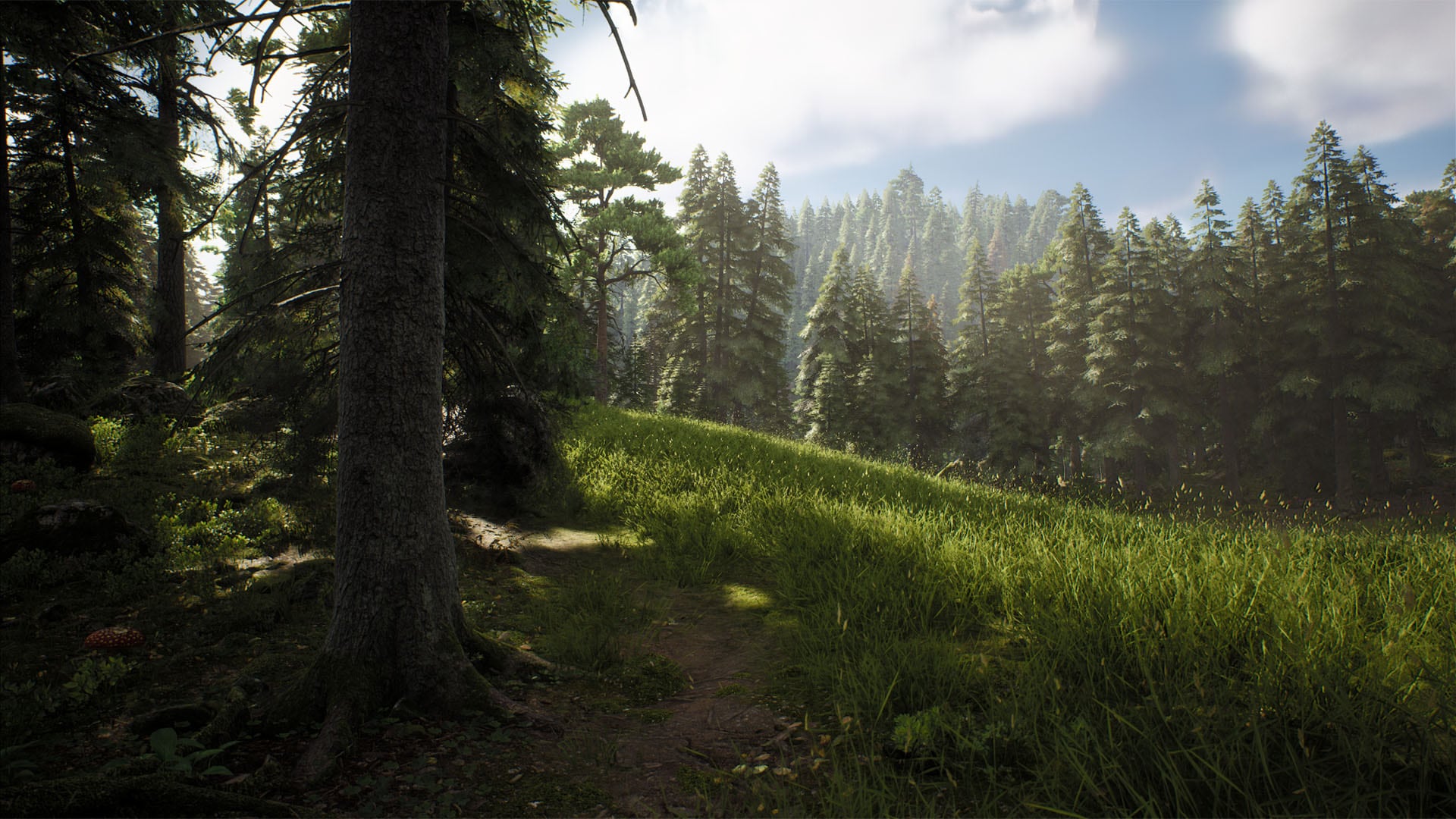 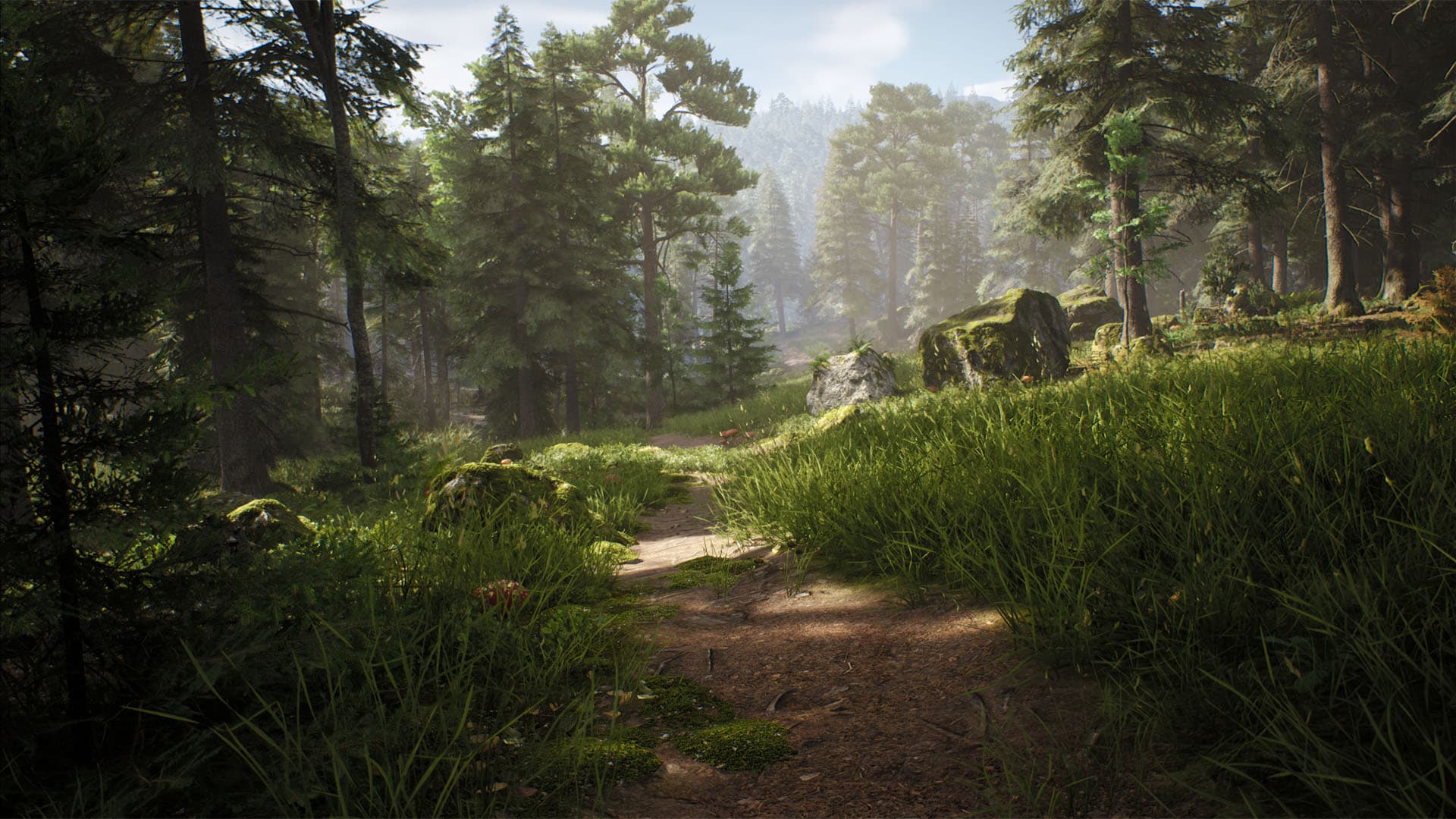 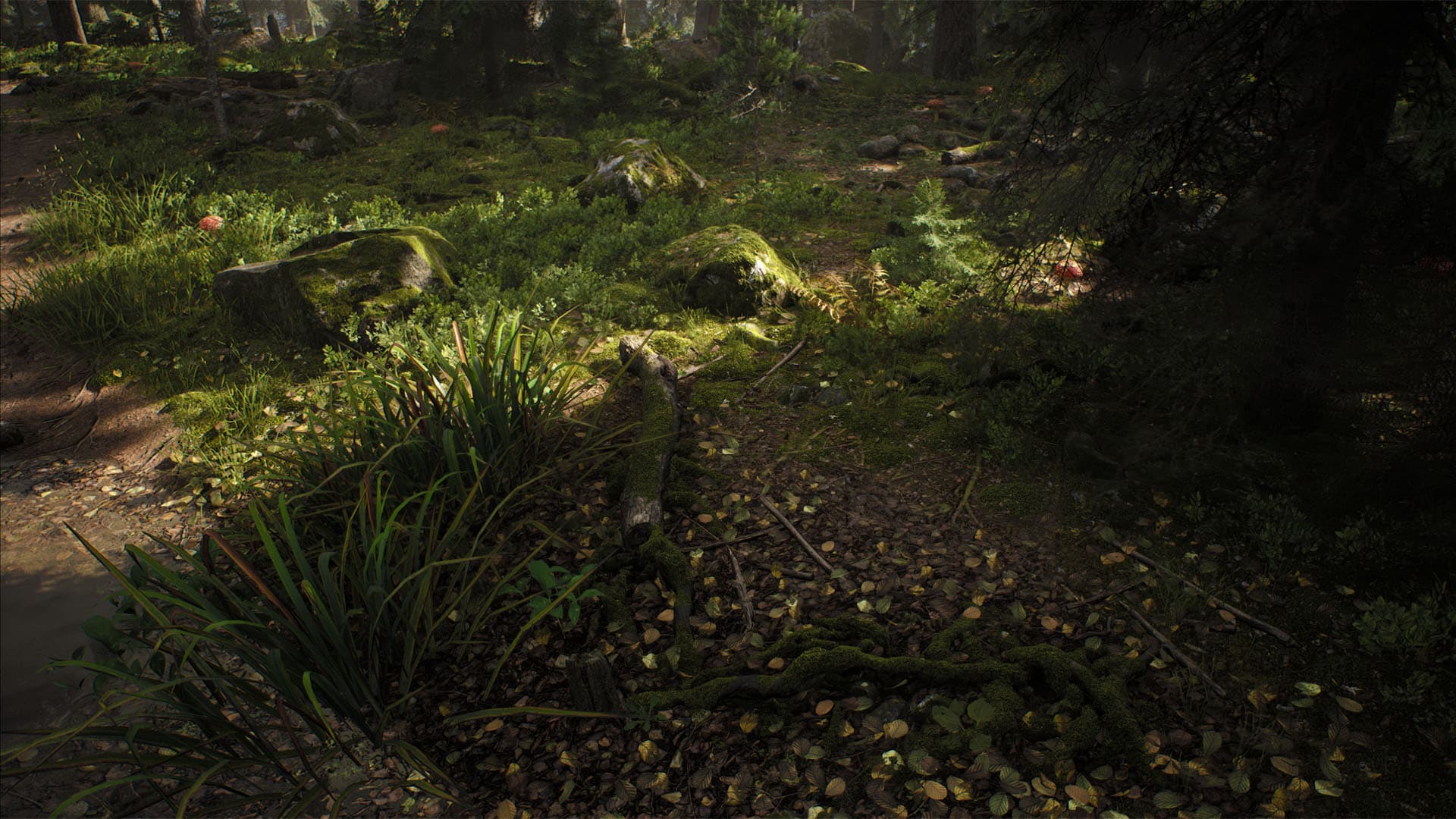 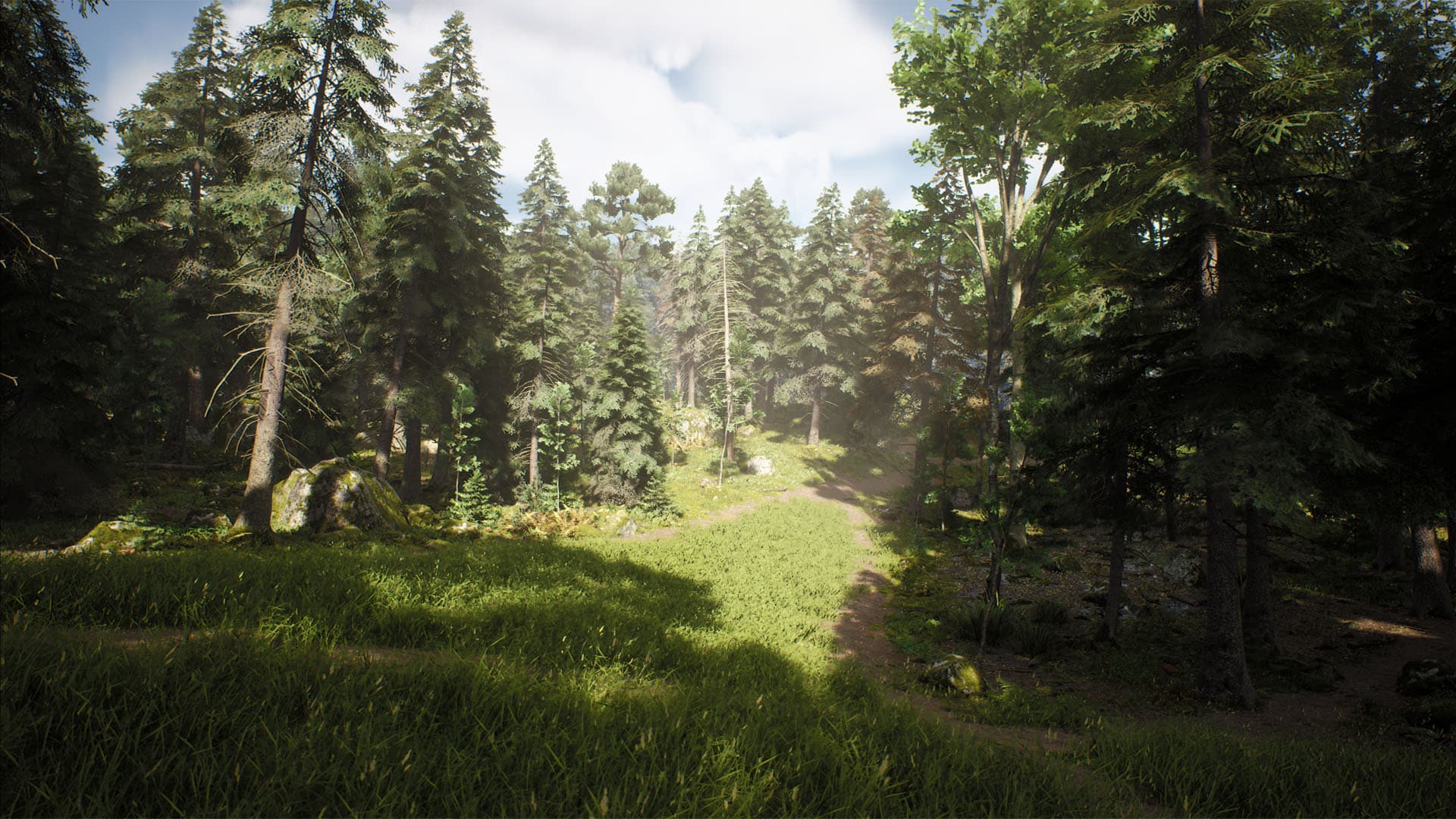 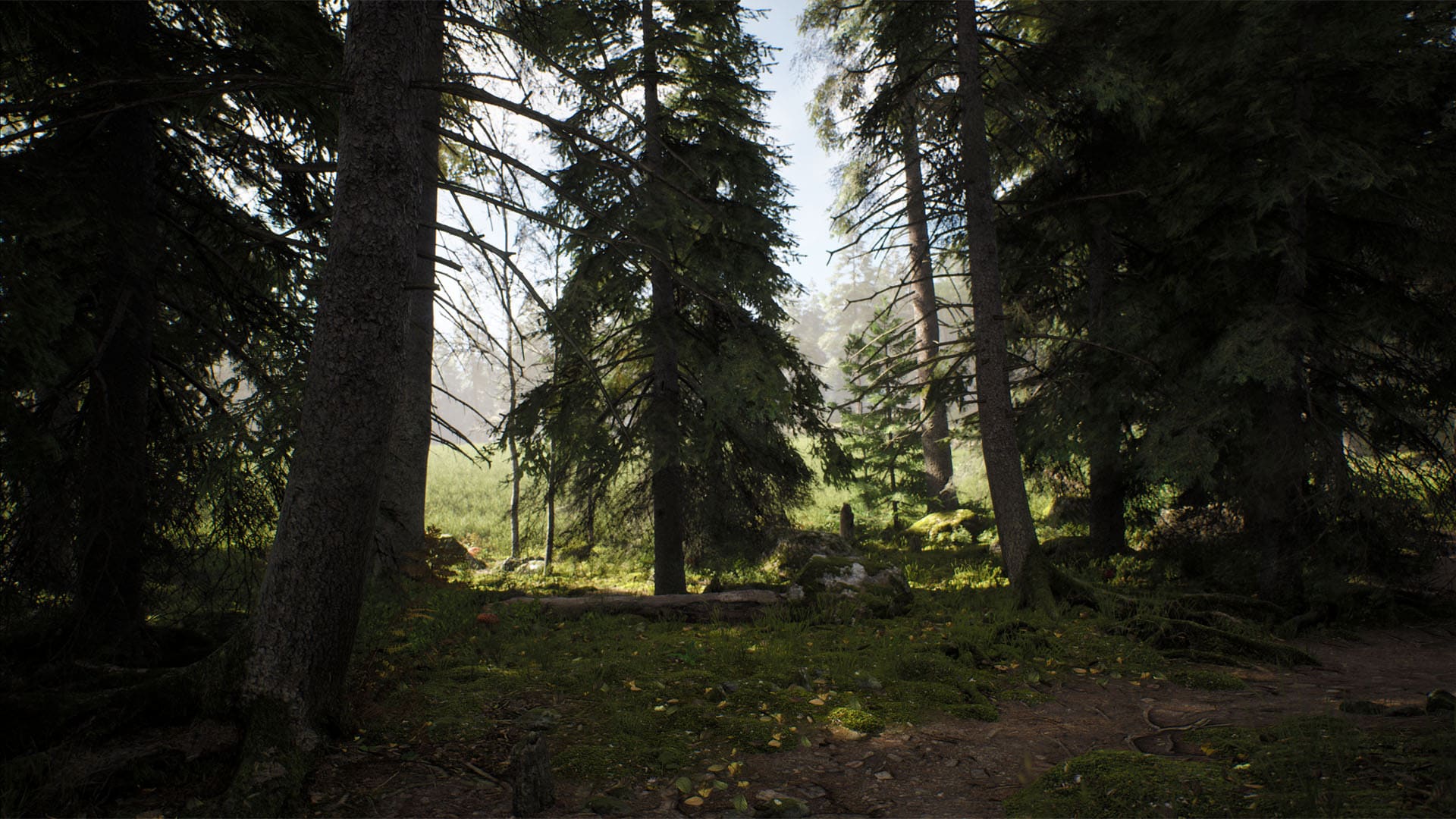 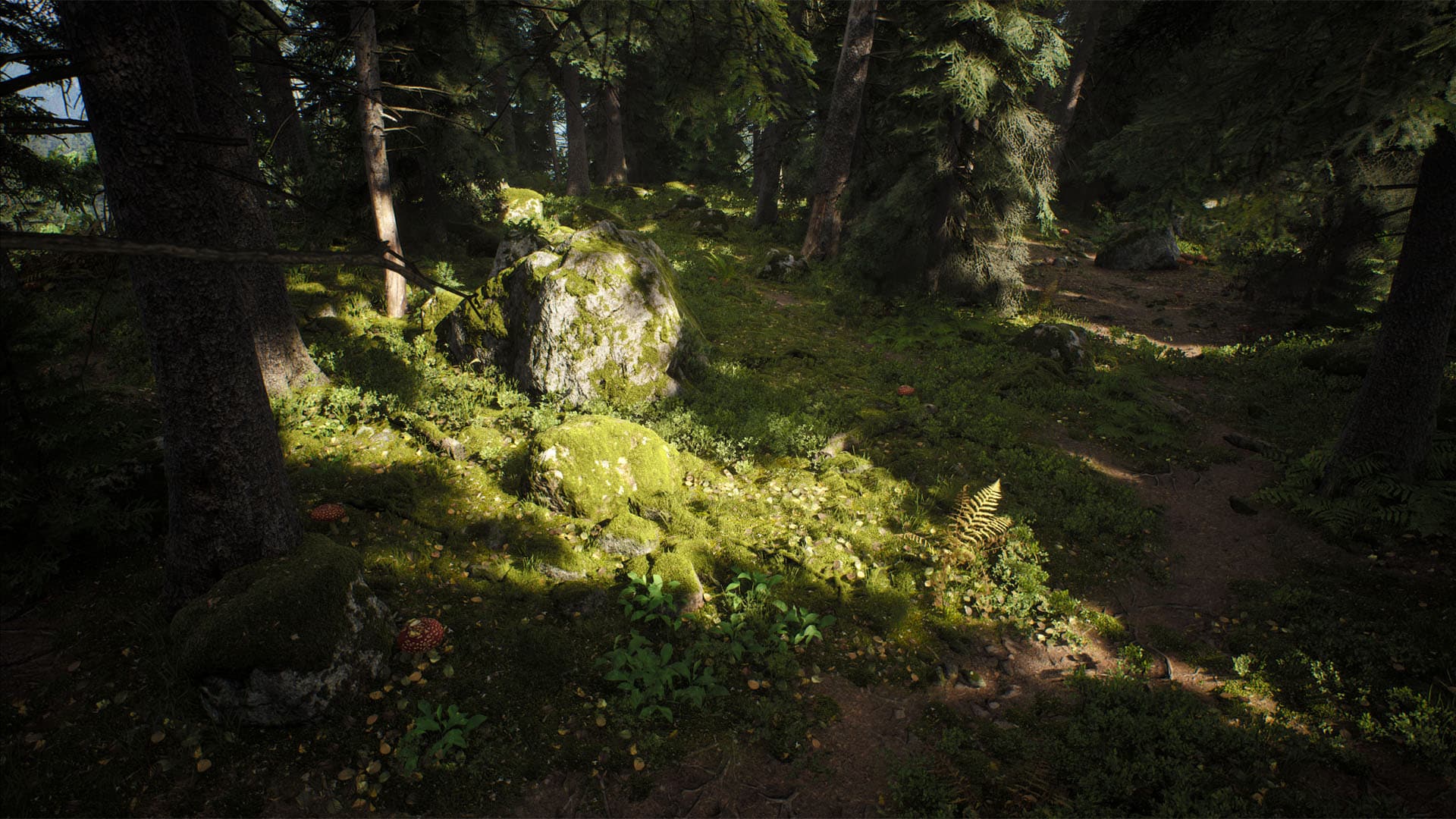 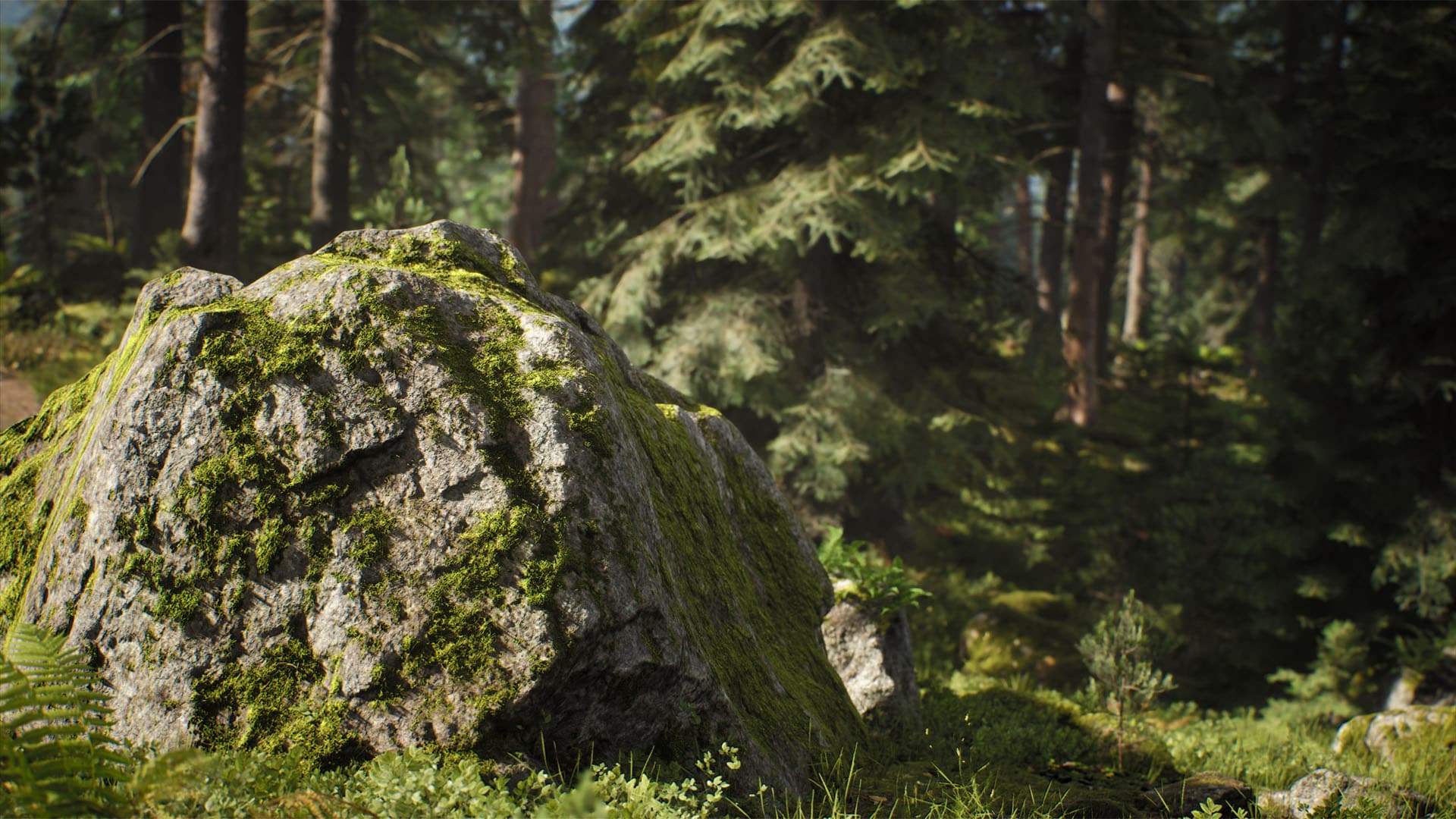 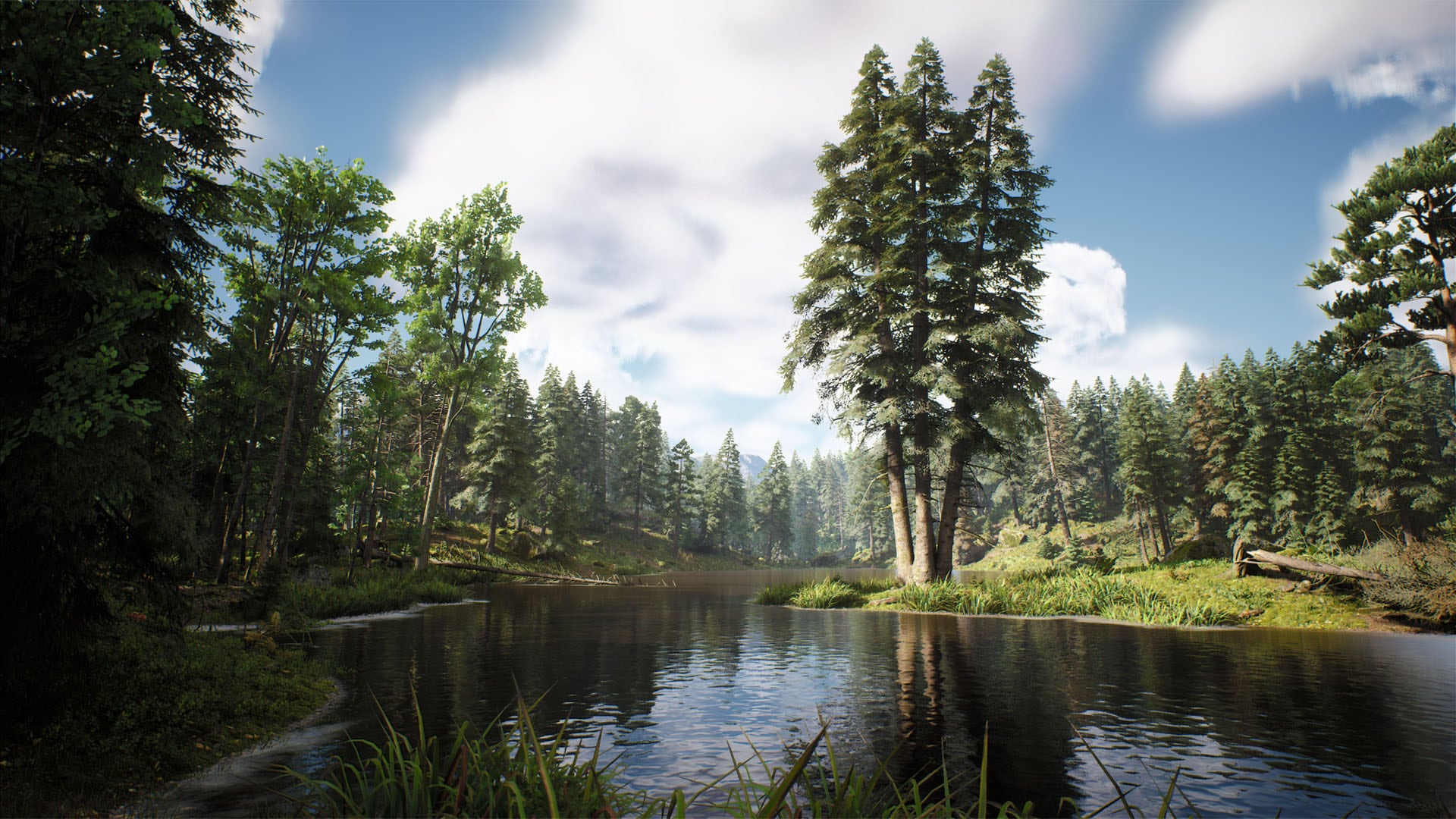 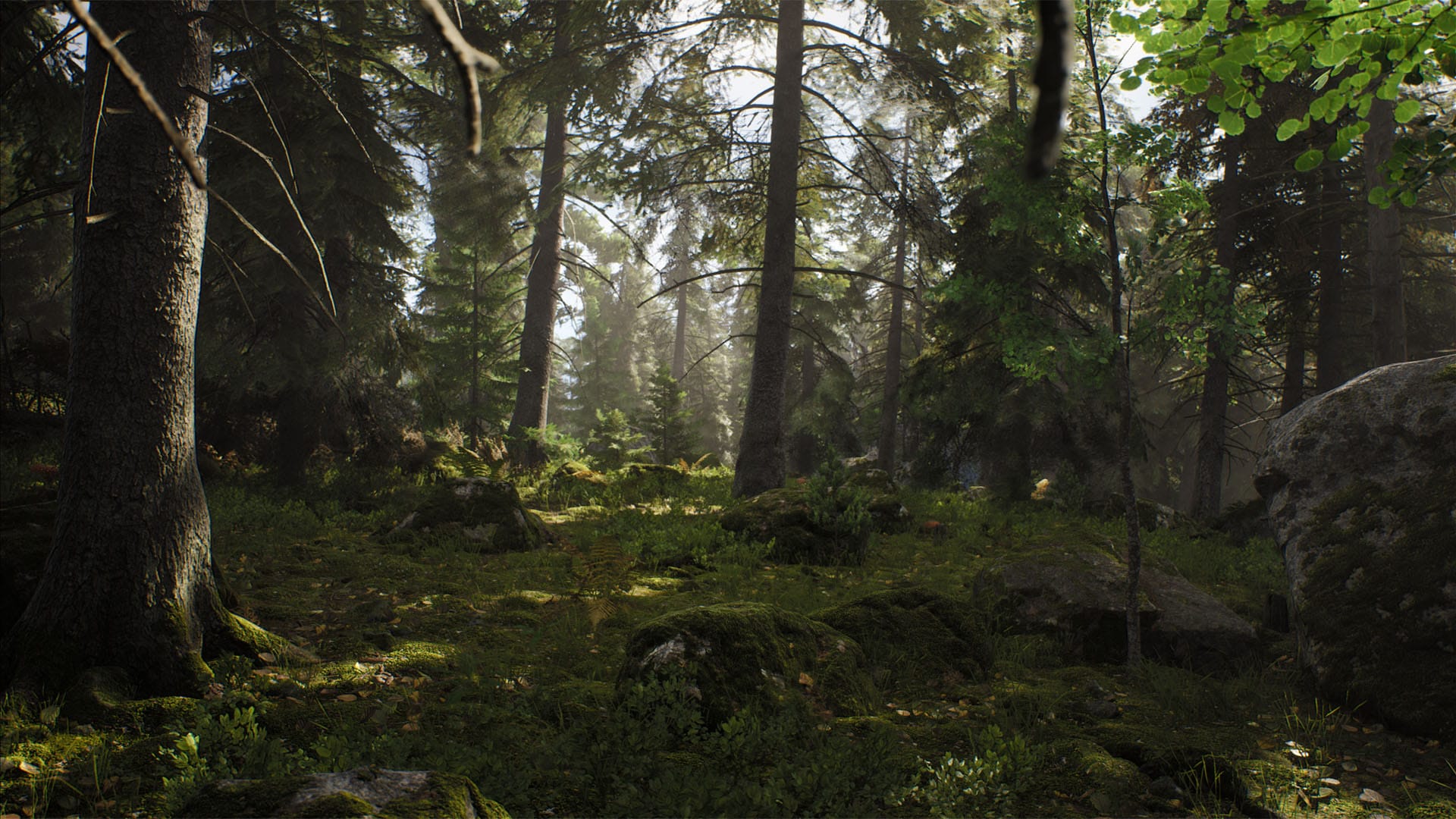 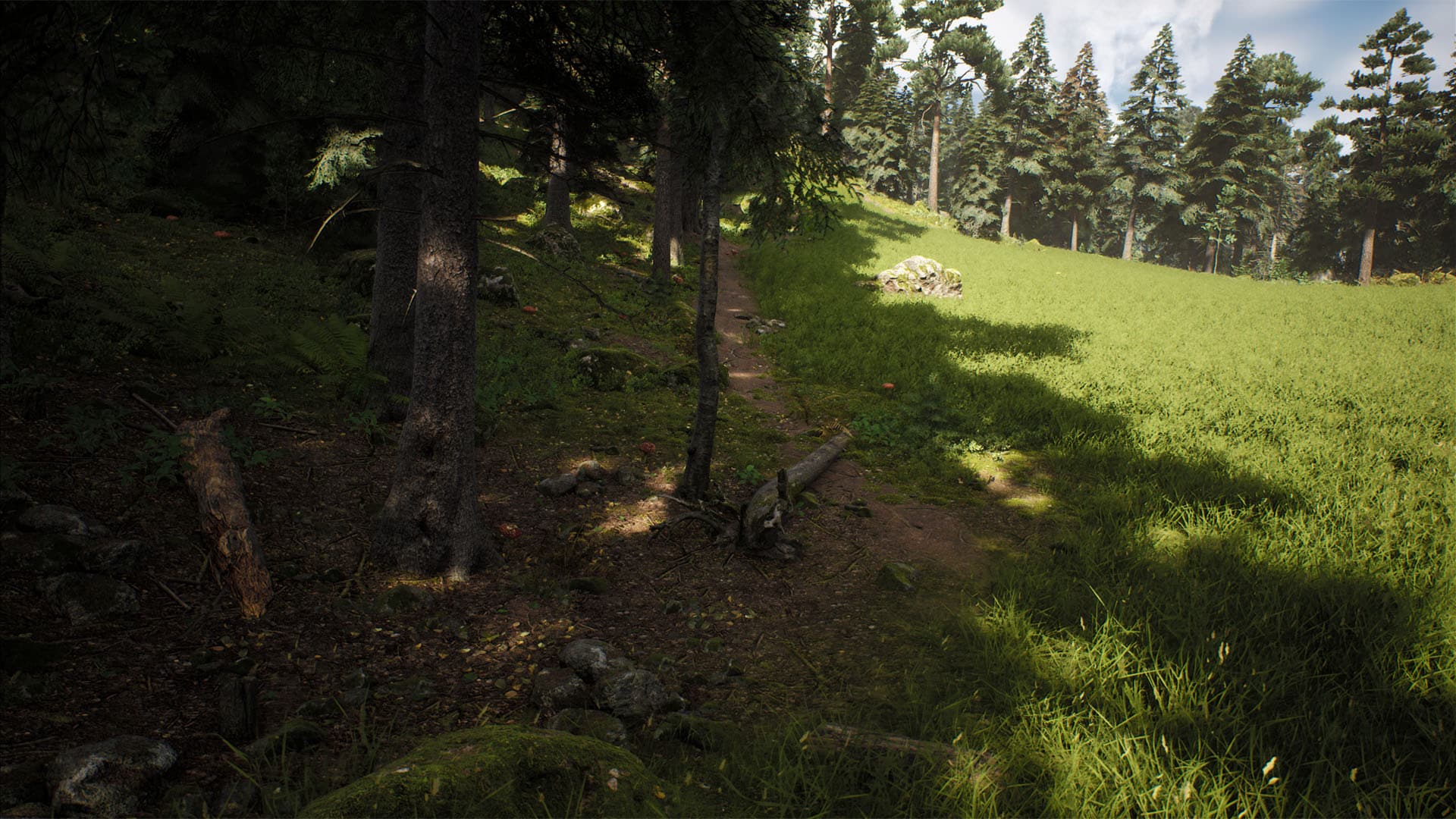 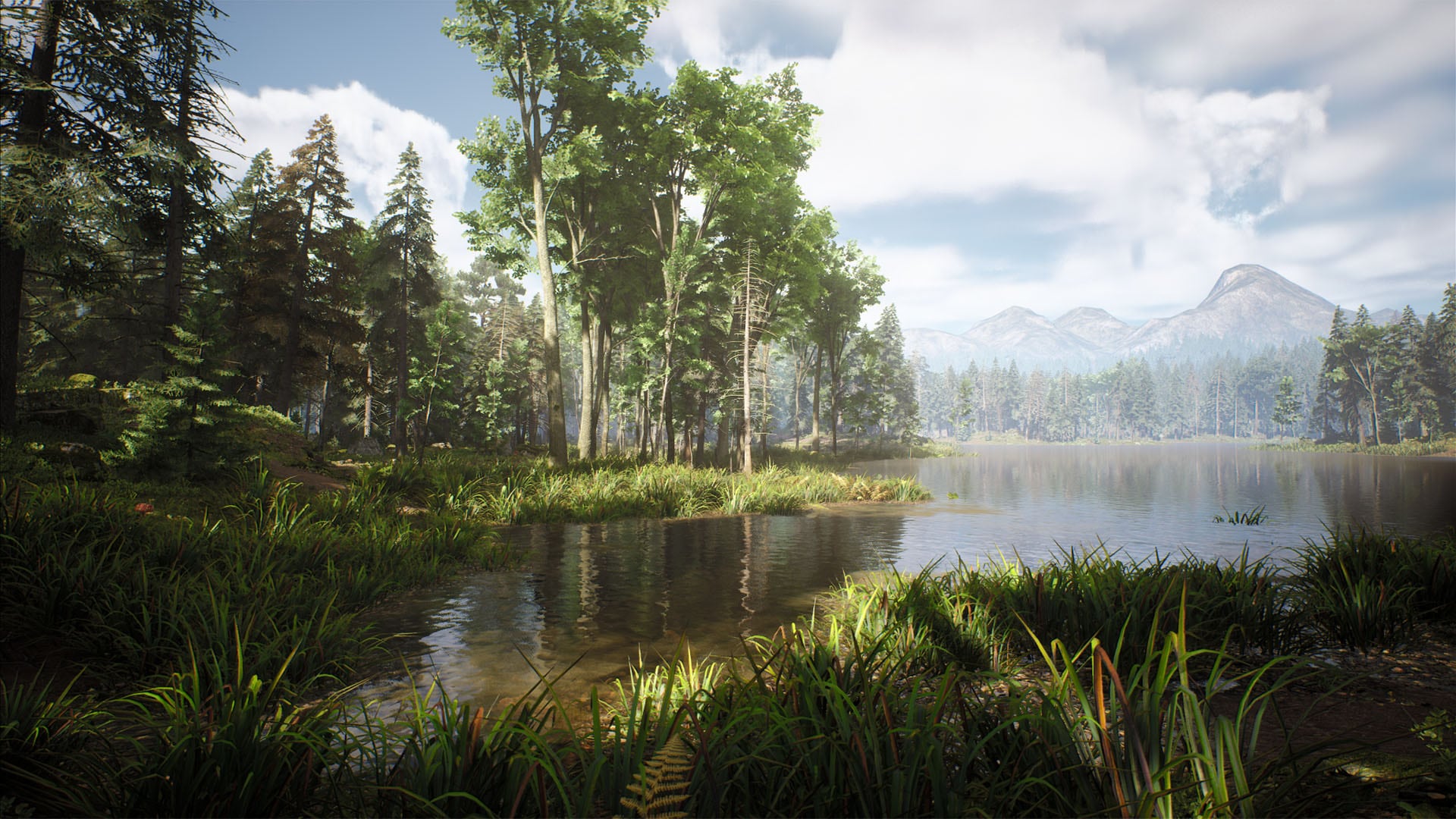 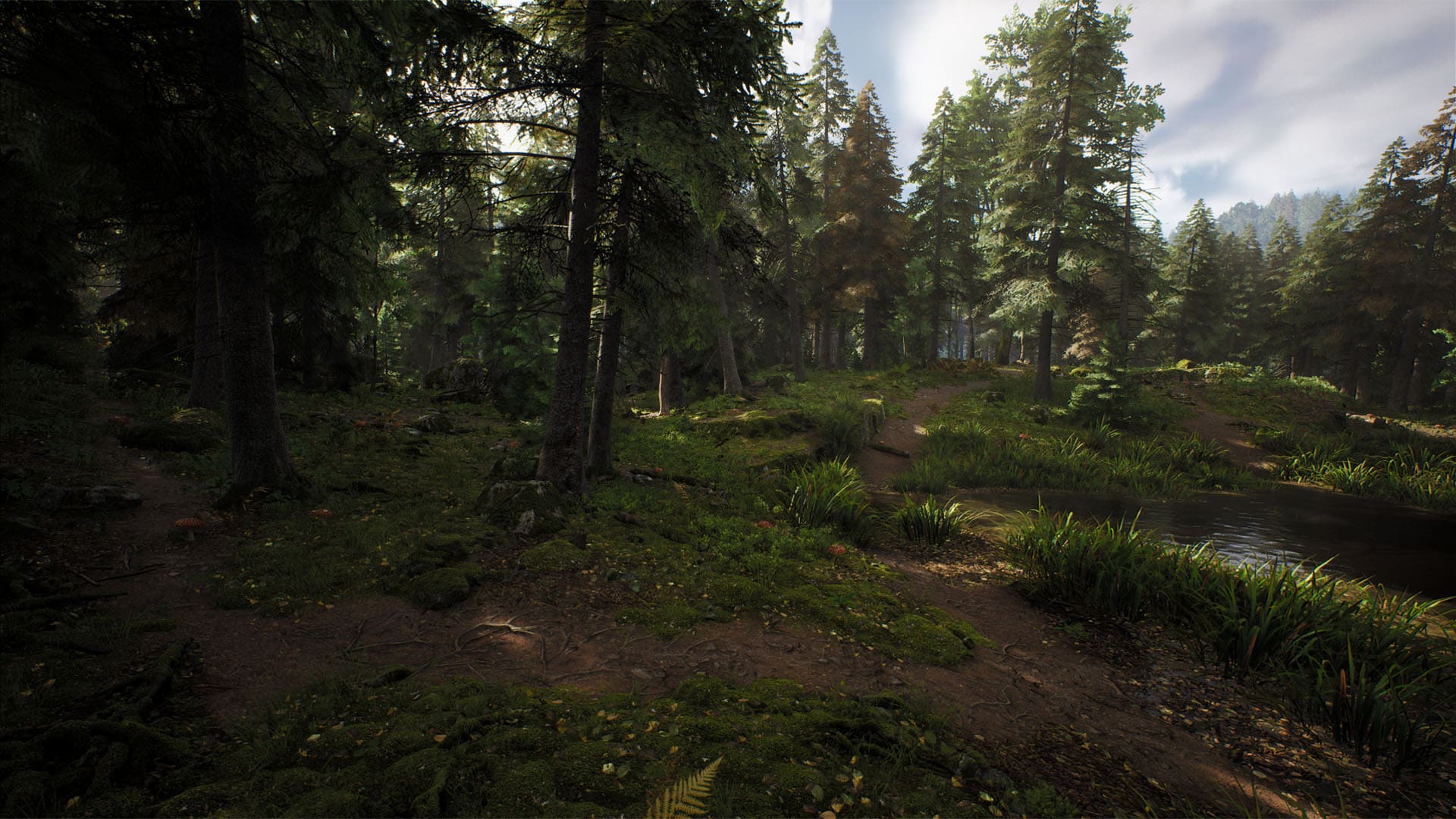 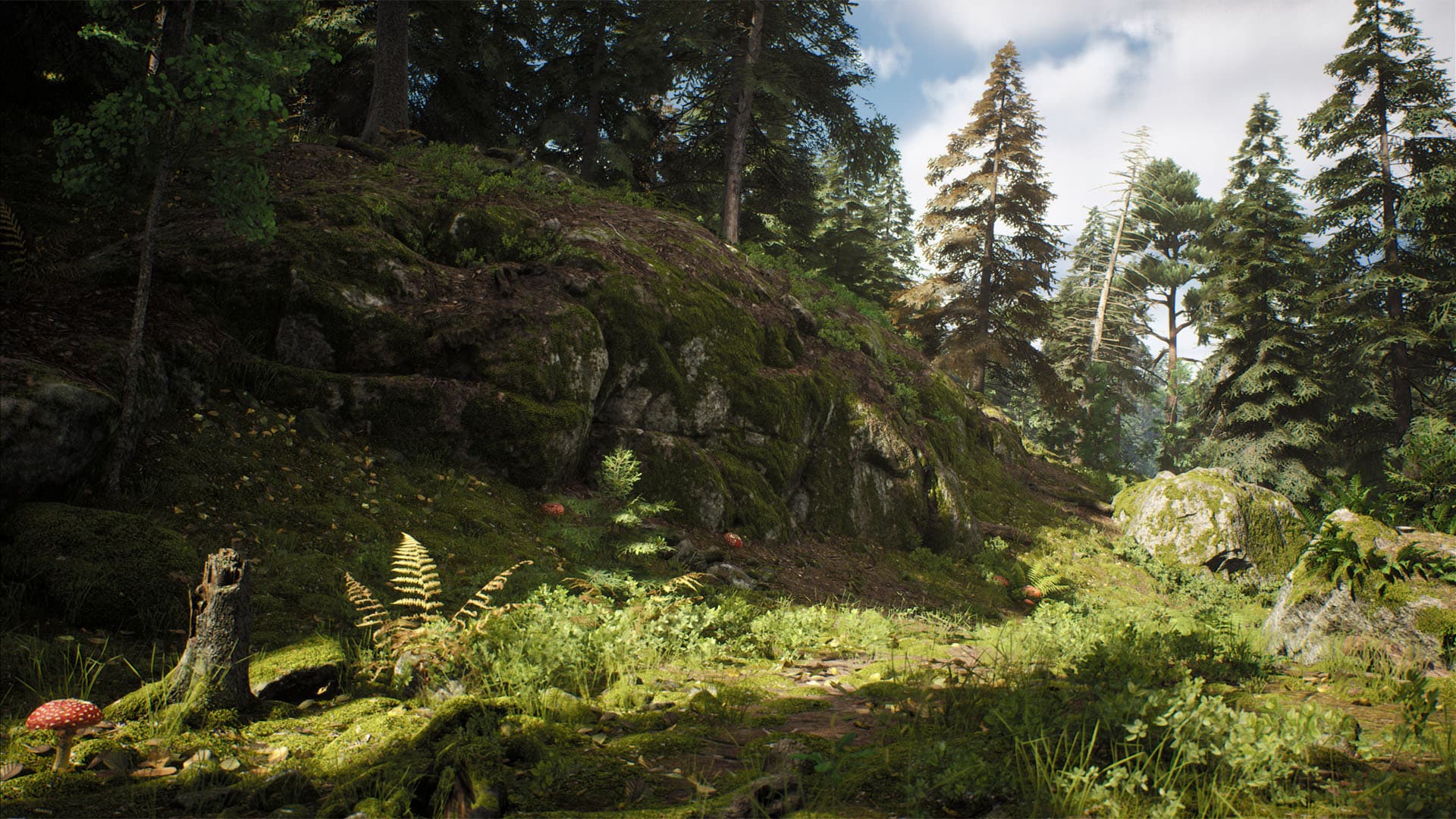 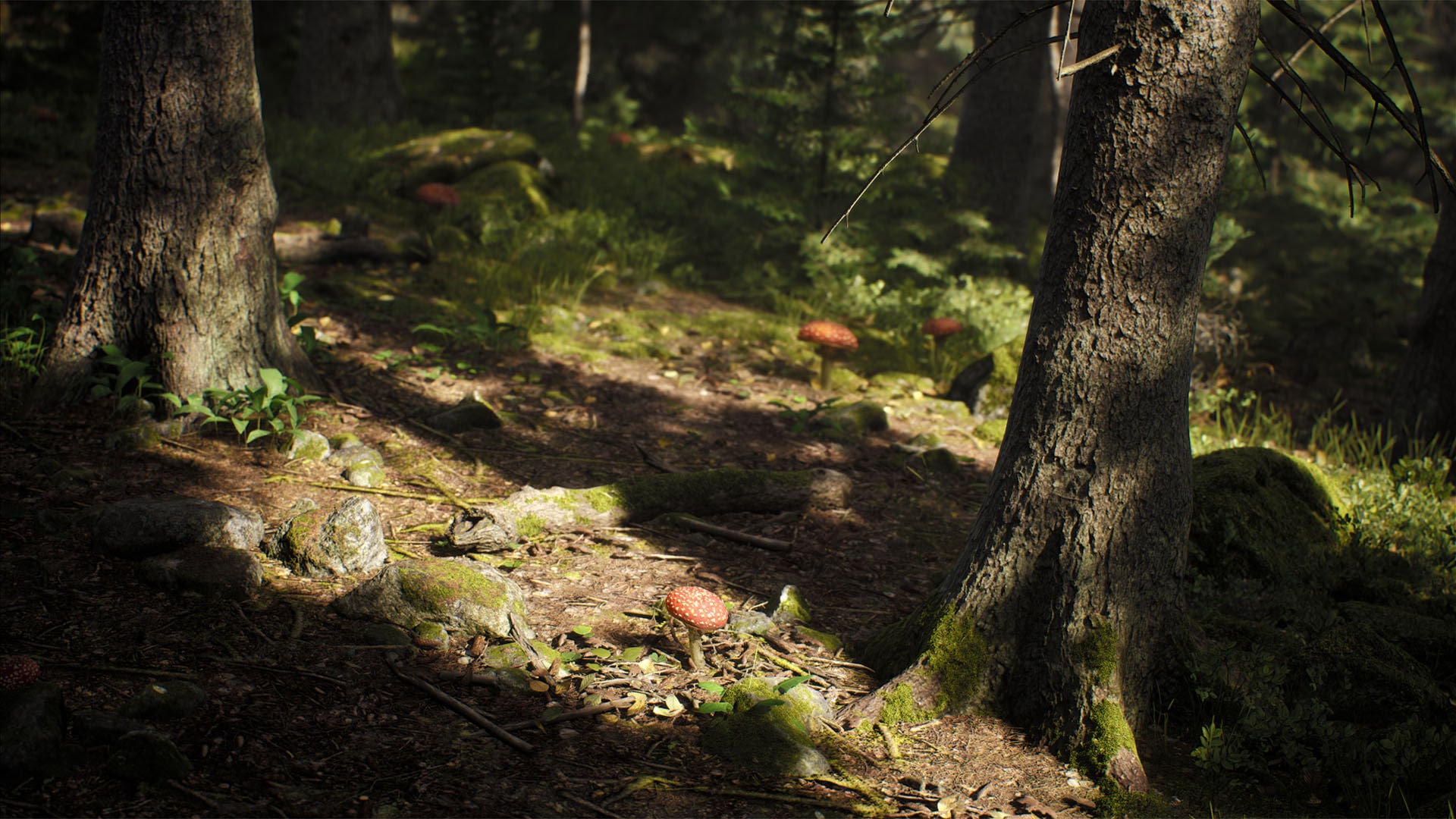 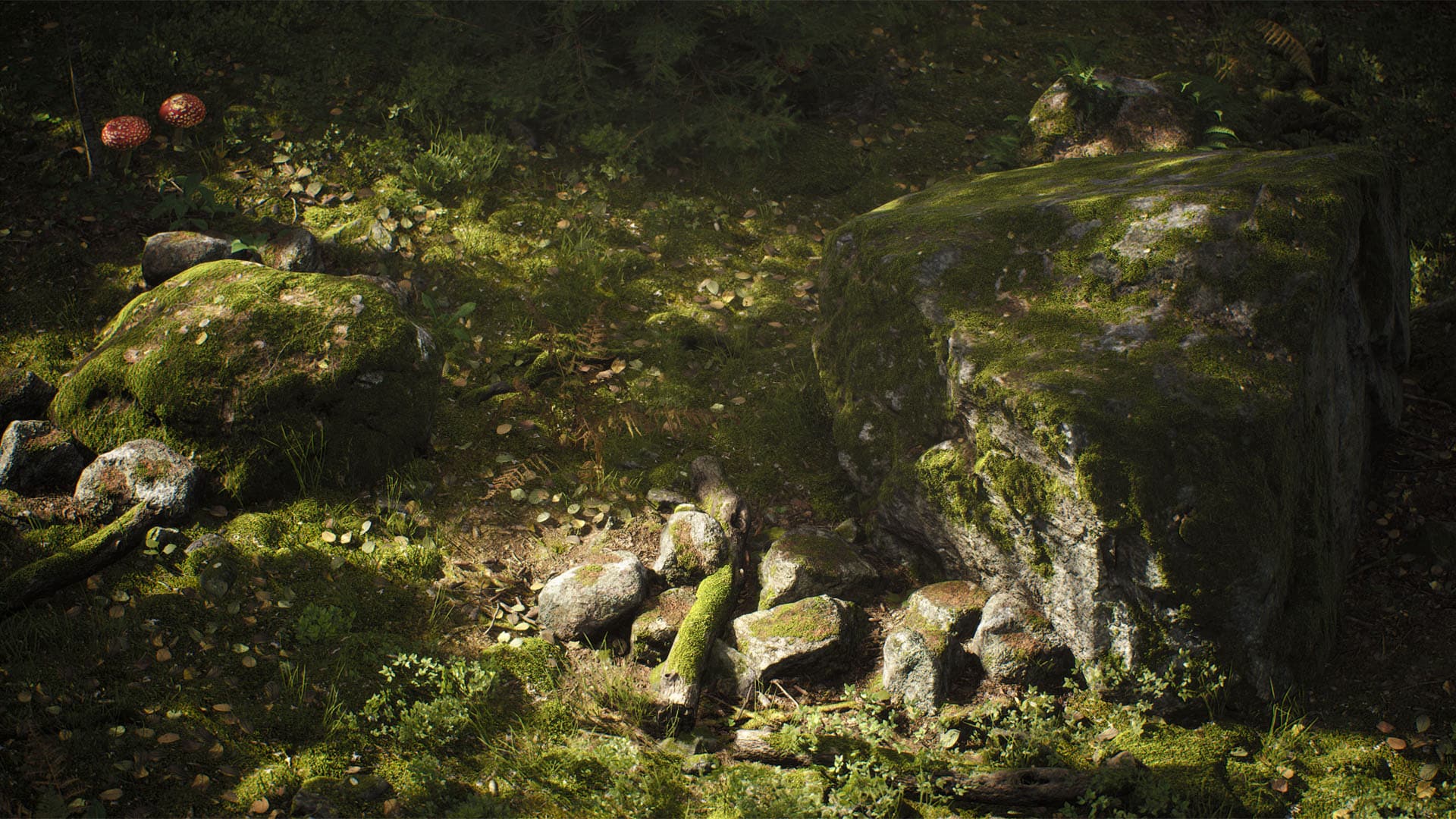 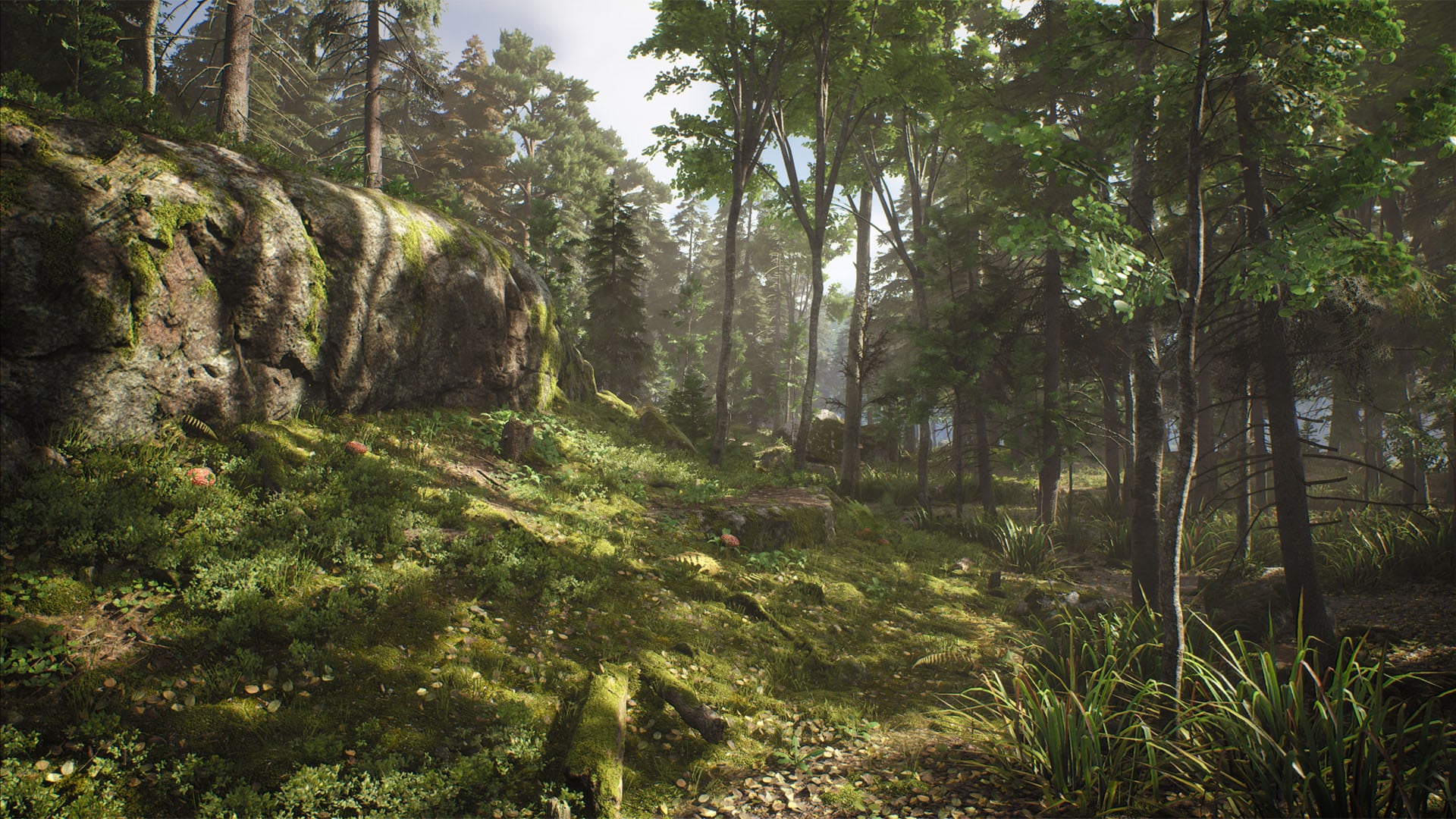 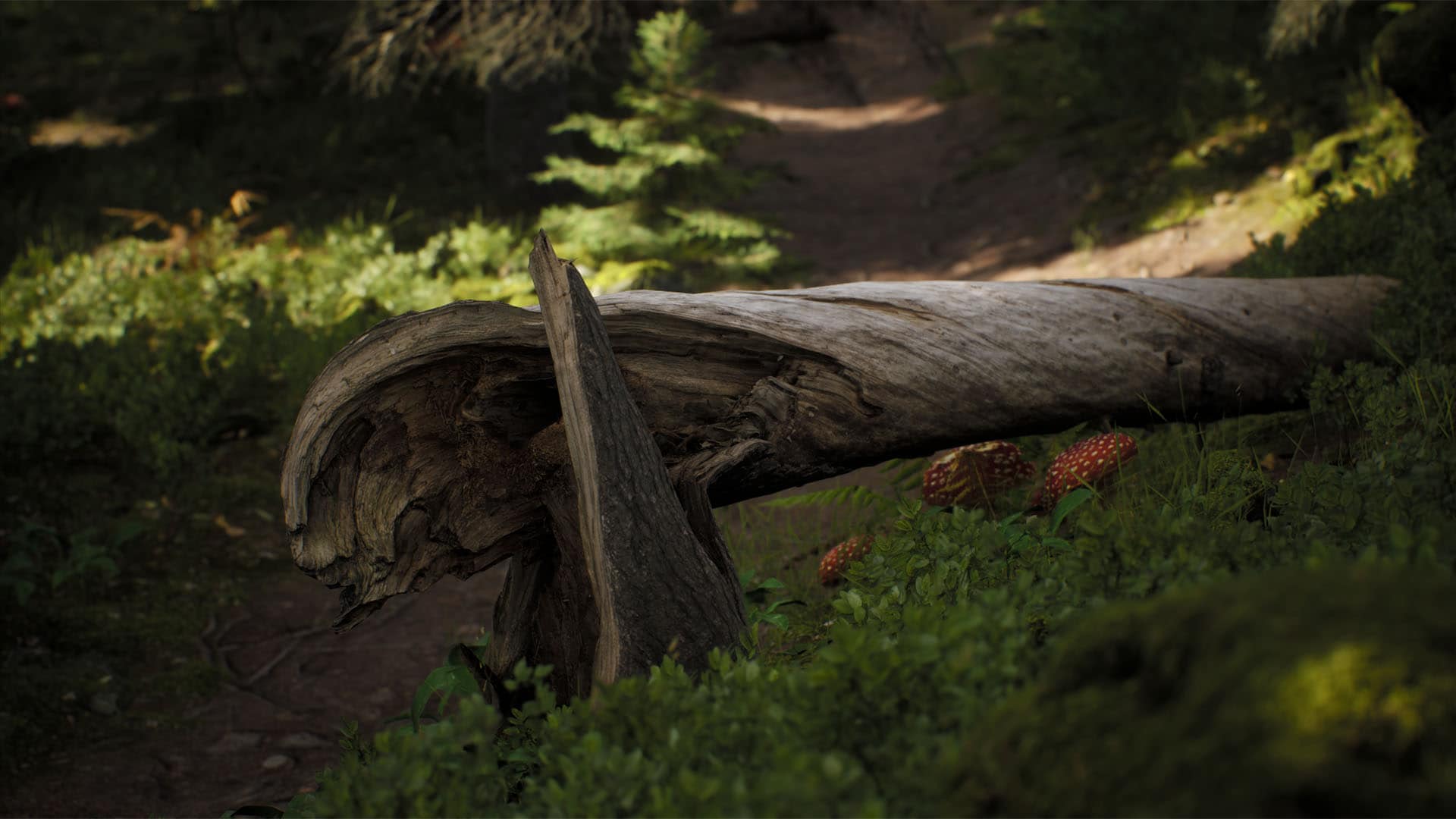 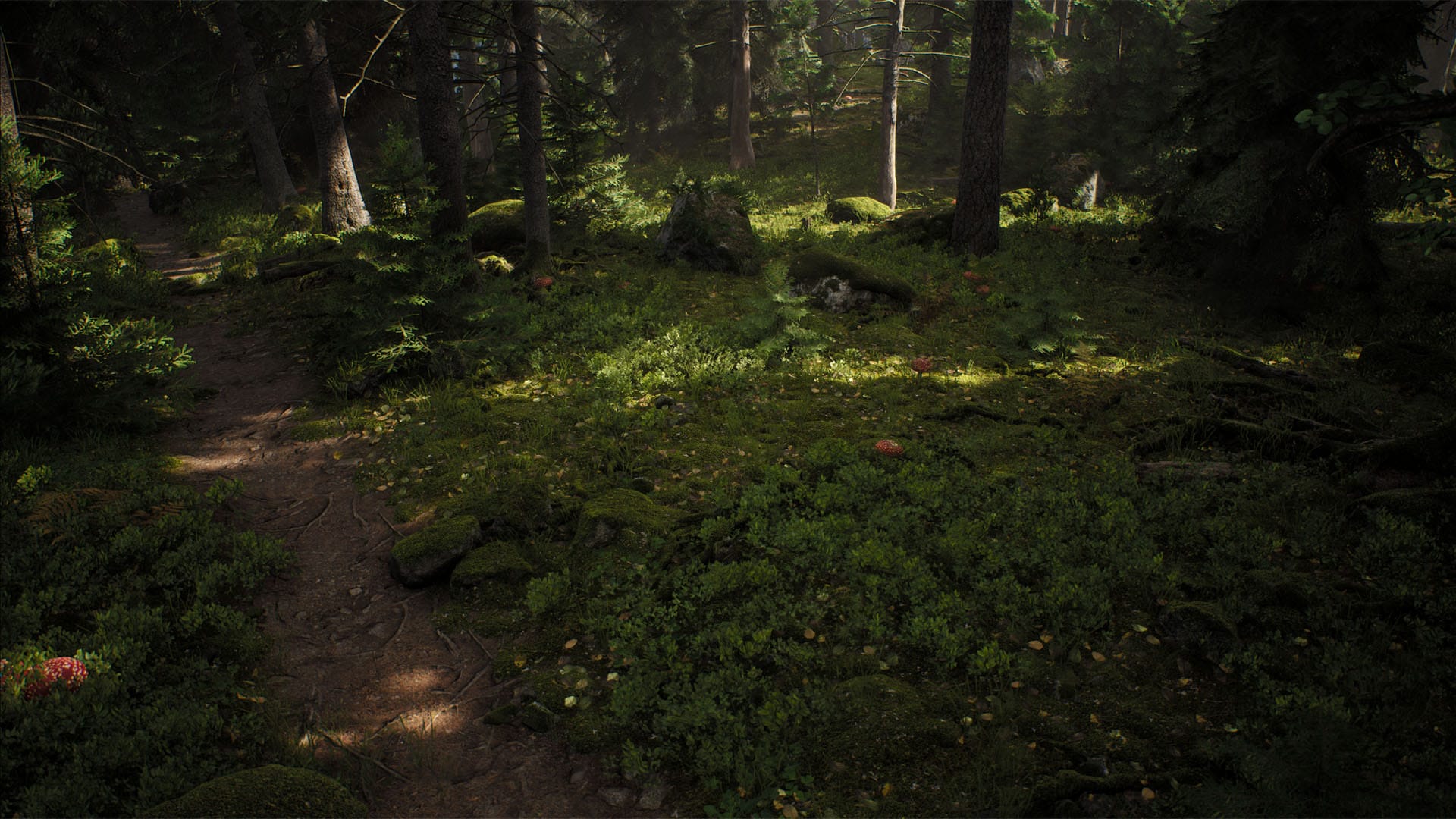 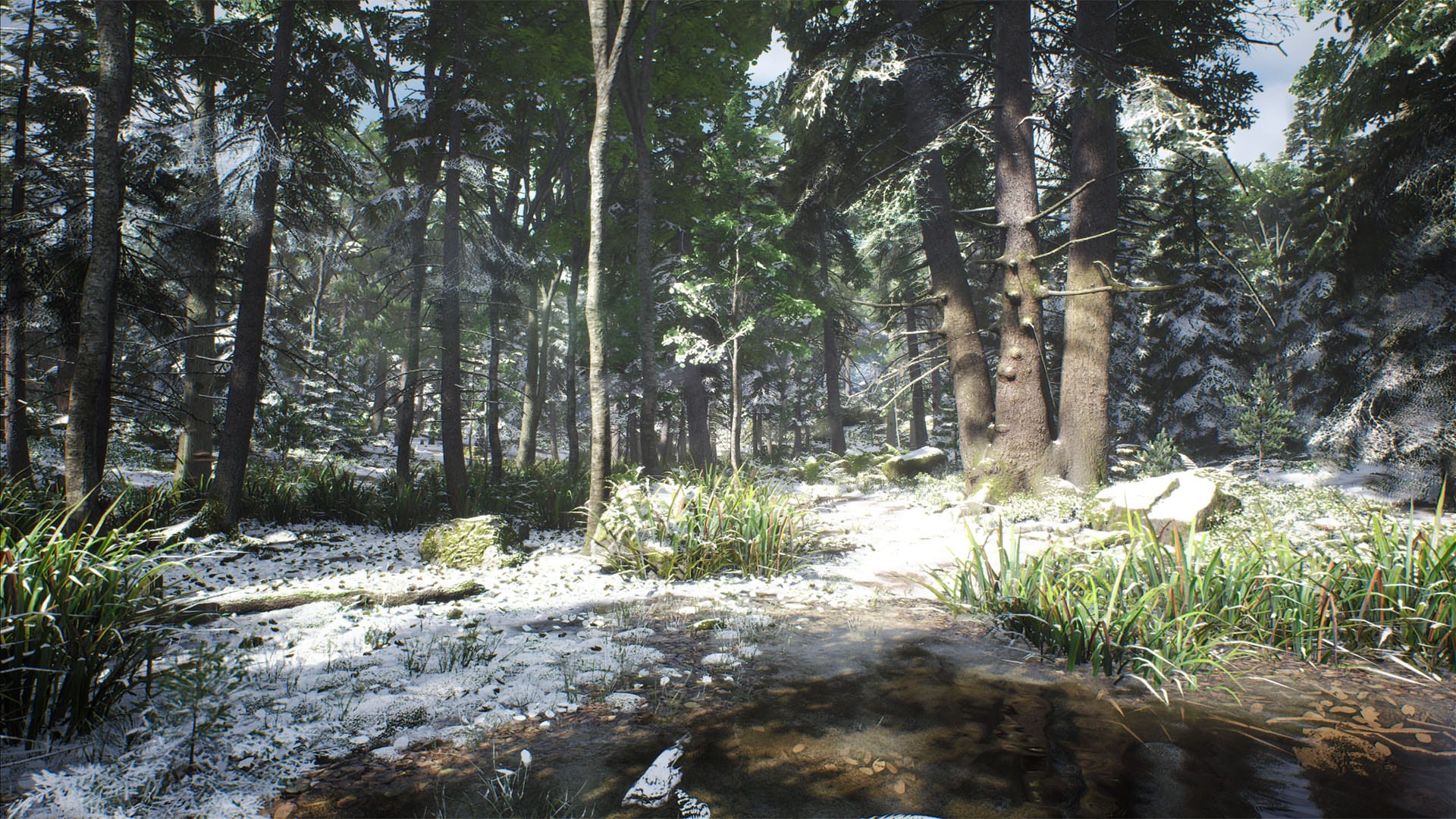 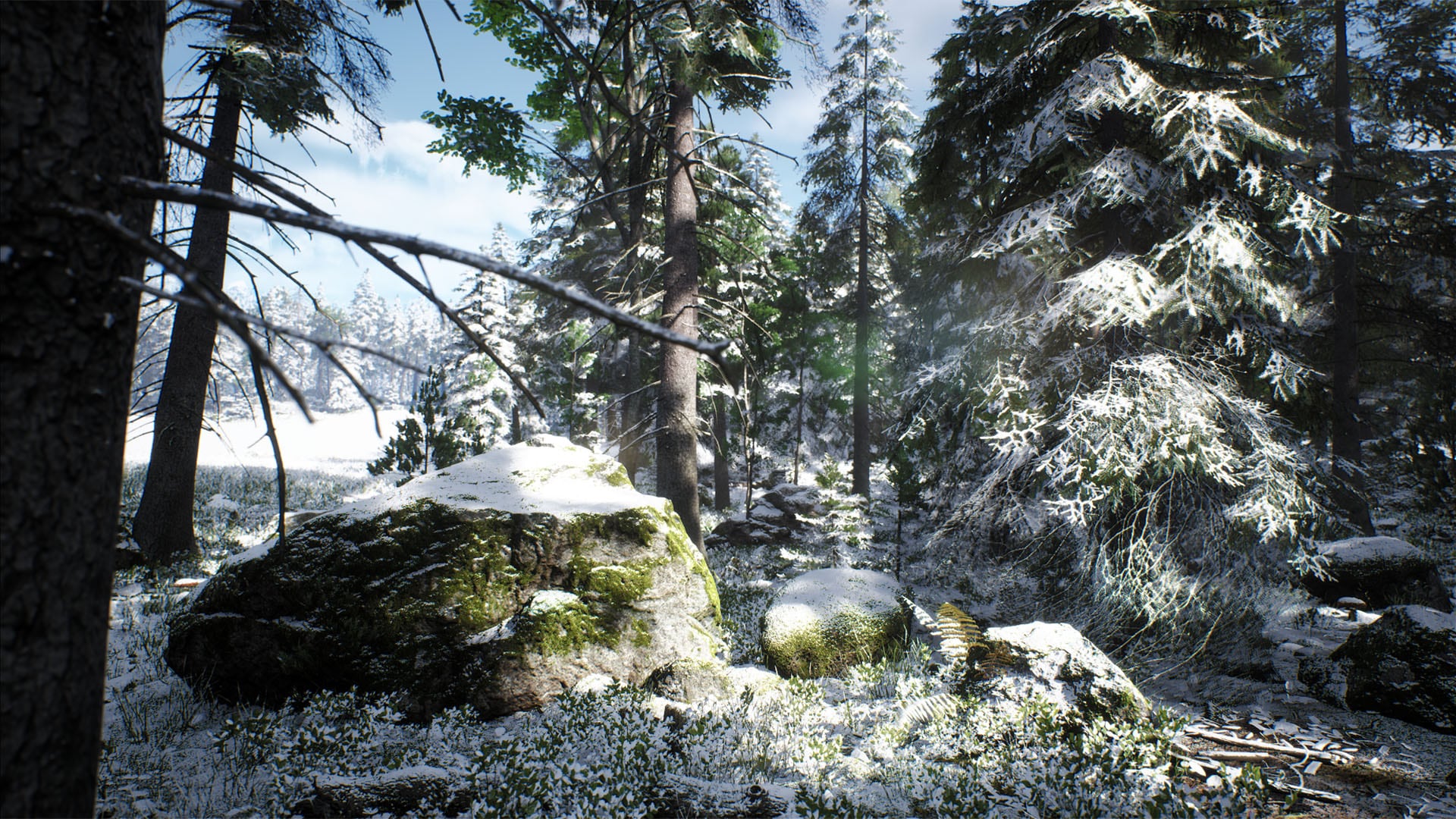 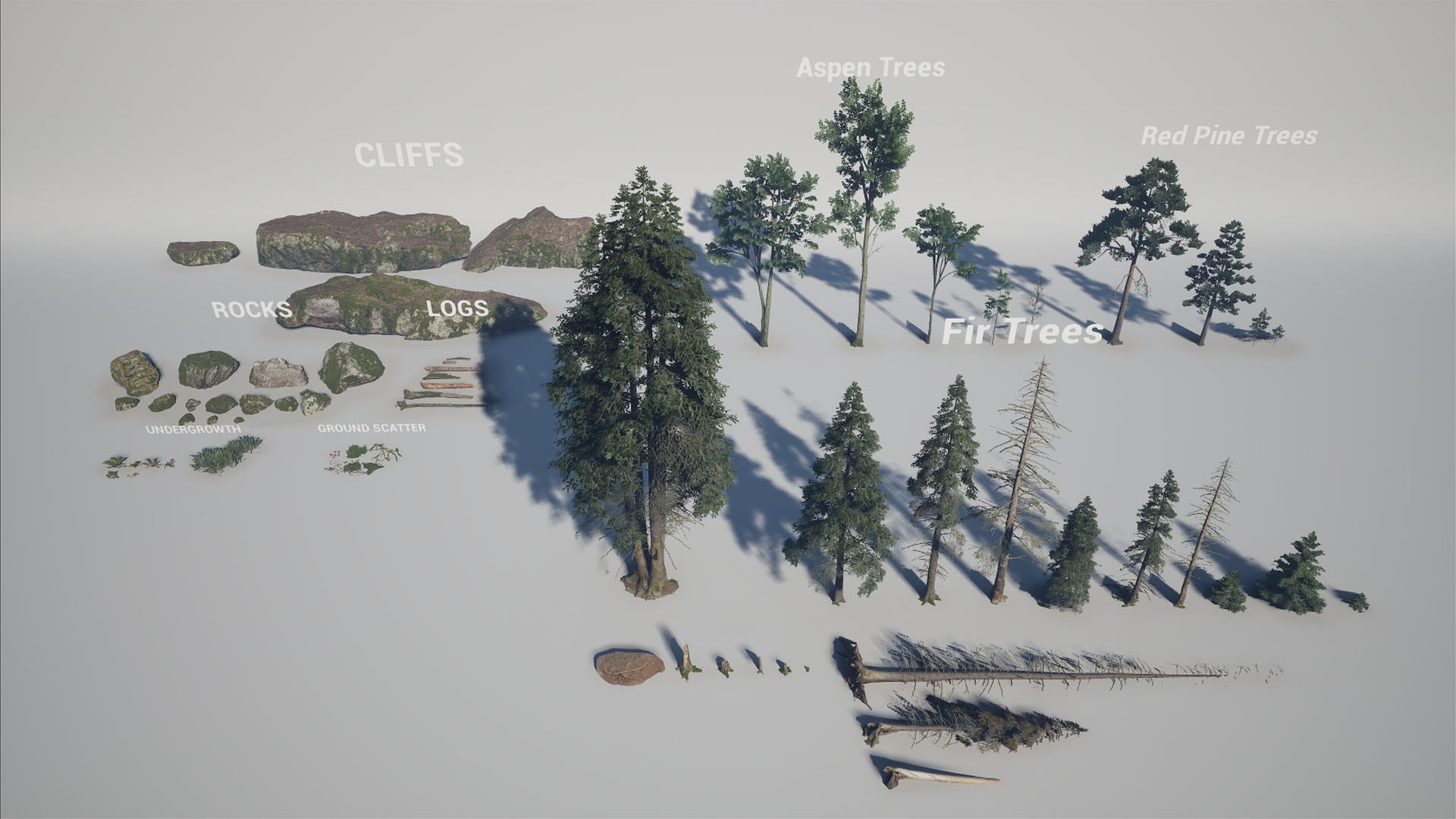 Adjusted Billboard distances to reduce issues when viewing the billboards from certain angles.

This will have a slight impact on performance.

To revert the change, open M_Foliage and change the Opacity Mask Clip Value in the Root node back to 0.5

This pack contains everything needed to recreate a realistic mossy conifer forest for your game or scene!

Everything has been carefully and thoughtfully crafted and optimized to run on currently gen hardware.

Every mesh is lodded and set up with custom LOD distances and Shader LODs where needed to reduce rendering cost at a distance.

Most asset come with 4k textures, but have been scaled down in engine to reasonable "game" sizes so that it fits within Unreal's default StreamingPool. Of course without sacrificing any noticeable visual fidelity.

All trees and large vegetation have been set up with billboards for maximum performance and visuals, as well as Pivot Painter Wind for realistic movement.

Wind strength can be controlled globally through a single parameter in the Parameter Collection named MPC_Weather, to go from a light breeze to full on storm.

Also within the MPC_Weather is a global snow parameter which will add a light coating of snow to the scene.

Landscape shader is optimized and set up with 5 materials, one of them being a Path Material, intended to create gameplay paths, and no procedural spawning will happen on the Path material, which makes creating visual guidance easy.

The Landscape Shader comes in two version, one with Tessellation/Displacement enabled and one without.

A word of warning, tessellation in Unreal is very expensive, and it is also no longer officially supported by Epic, and will not be available in future version of Unreal, so I would not recommend using it.

But if don't mind trading some performance for a little visual boost, I have included it none the less.

Also included in the Pack is the example map from the screen shots, it is a 2x2km procedurally spawned forest, complete with backdrop.

Within the map, in addition to the regular conifer forest, you will find small sub-biomes such as swamps, grassy meadows and lakes.

It is hard to convey the sheer scale of the map in just screenshots and video, so I recommend everyone to fire it up in an FPS Template project and go exploring!

Just remember to also copy THESE .ini files into the project or the performance and visuals will be off.

It might sound silly, but these are important, by default Unreal is not at all configured for performance, so you can gain *a lot* by learning what settings to turn on and off in these files!

Everything is spawned using Procedural Foliage Volumes set up in numbered order. So they are intended to spawn in the order suggested by the names . Please note, that due to the sheer size of the map, each volume can take several minutes to re-spawn. While this is unfortunate, it is still preferable to populating 4km2 by hand, right? ;)

NOTE1: If you don't plan on using the dynamic snow, you can save a little bit of performance by going into the MF_Snow Material Function and un-checking the Boolean in there. This will disable the snow across all parent shaders and remove its cost completely.

NOTE3: Unlike my previous environments, this is set up as an Asset Pack to make it easier for you guys to use in your own projects. Unfortunately this means that in order to get the correct lighting, visuals and performance in the Example Level, you need to manually download my .ini files and place them in your projects Config folder:

You can find the .ini files HERE

Collision: Yes, generated capsules for all trees, convex hulls for everything else

Documentation: Link (or a description of where users can find) the documentation 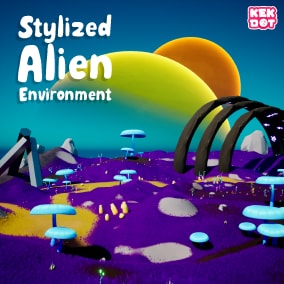 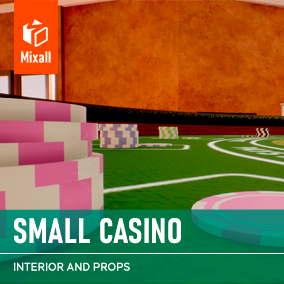 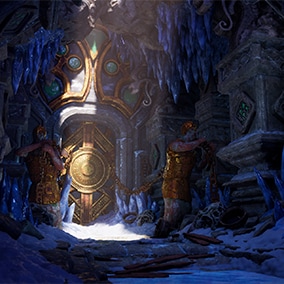 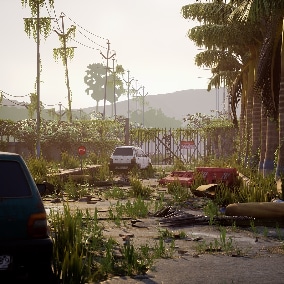 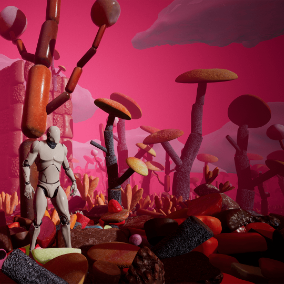